Last week I had the unfortunate experience of trying to deal with American Airlines regarding some travel arrangements via its Advantage help desk.  I literally spent hours on the phone trying to get to the right person.  I won’t bore you with the details of my experience, however I did want to talk about how American used social media analytics in an active way – and where it came up short.

By now, many people are aware that companies are not only using social media analytics to understand what is being said about their brand; they are using it to actively engage with a customer when there is a problem as well.  This typically involves some sort of automatic classification of the problem, automatic routing to the right person, and suggested responses to the customer.

The good news was that when I tweeted about American Airlines I actually got a response back from them.  Here’s my first tweet and response: 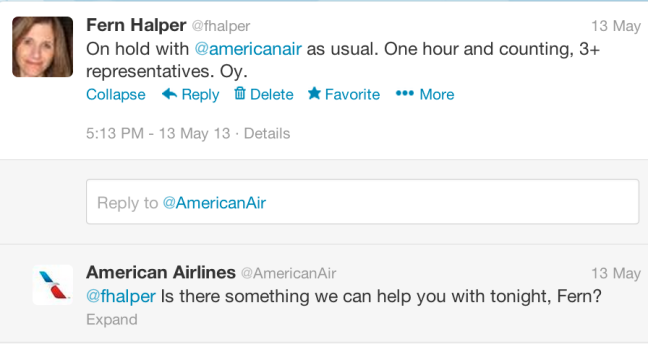 So far, not bad.  Here’s the next round of tweet/response:

Well, this was not what I wanted to hear, since it only partially addressed my issue.  If I just wanted an apology, I would not have bothered to tweet about a credit.  I would have preferred a follow up email (if they had a way to link my information together) or at least the contact information where I could get more help.  American Airlines wasn’t helping me they were whining.

So then I tweeted the following:

I gave up after this response. Frankly, it almost sounded sarcastic.  Should I have said, “Not on twitter, send me an email contact?”  I’m sending a letter to Craig Kreeger, instead, explaining my dissastisfaction. Maybe I’ll send it snail mail……….

My point is that if you’re going to engage your customers online via the channel that they used in the first place, make it count.  This exchange simply annoyed me.  Maybe twitter wasn’t the best channel for customer service, but it is the one that I used since no one was answering the phone and the American site couldn’t let me perform the function I wanted to do.  I’m not saying its’ easy to engage adequately via twitter.  To do this properly would have involved more finely tuned text analytics to understand what I was actually talking about as well as a way to integrate all of my data together to understand me as a customer (i.e. my loyalty information, recent trips, etc).  Maybe the customer service reps were tired after last month’s outage debacle at American when thousands of passengers were